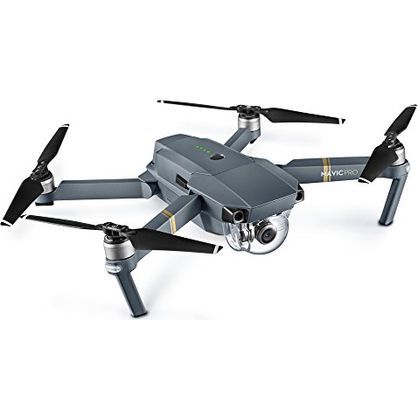 $679.00
$999.00
Product grade:  ReStored
What is ReStored?
product
Out Of Stock
Get notified when it's back in stock Enter your email address to receive a notification:
Buyer Protection
Read more

The DJI Mavic Pro Quadcopter is a small yet powerful drone that turns the sky into your creative canvas easily and without worry, helping you make every moment an aerial moment. Its compact size hides a high degree of complexity that makes it one of DJI's most sophisticated flying cameras ever. 24 high-performance computing cores, an all-new transmission system with a 4.3mi (7km*) range, 5 vision sensors, and a 4K camera stabilized by a 3-axis mechanical gimbal, are at your command with just a push of your thumb or a tap of your finger. Rather than use Wi-Fi transmission, the Mavic uses DJI's newly developed OcuSync transmission system. Part of the Lightbridge family, OcuSync performs far better than Wi-Fi transmission at all transmission speeds. OcuSync also uses more effective digital compression and channel transmission technologies, allowing it to transmit HD video reliably even in environments with strong radio interference. Compared to traditional analog transmission, OcuSync can transmit video at 720p and 1080p - equivalent to a 4-10 times better quality, without a color cast, static interference, flickering or other problems associated with analog transmission. Even when using the same amount of radio transmission power, OcuSync transmits further than analog at 4.1mi (7km). OcuSync goes even further than optimizing the communication mechanism and parameters of aerial imaging. There are several video transmission systems on the market claiming to offer video transmission with zero latency. However, it should be noted that the physical layer of those transmission systems is too simple to adapt to changes in the environment. When affected by signal interference, the image quality of the video being transmitted will fall sharply. This means these systems are not suitable for far field transmissions and transmissions in interference-heavy environments. Also, because these video transmission systems are not integrated into the whole system, latency will