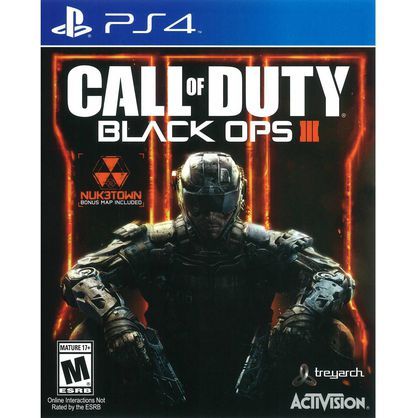 (5)
ReStored
$17.00
$49.88 Save $32.88
This product is out of stock. See similar products in the category Video Games
To get accurate shipping information
Product Information

A Call of Duty Campaign Unlike Anything Before It: Co-Op Campaign: Treyarch elevates the Call of Duty social gaming experience by delivering a campaign with the ability to play cooperatively with up to four players online, using the same battle-tested network infrastructure and social systems that support its world-class Multiplayer and Zombies game modes. Cinematic Arena-Style Play: Designed for co-op and re-playability, players encounter all the epic cinematic gameplay moments Call of Duty is known for delivering as well as new open-area arena-style gameplay elements designed to allow players to approach the game with a different strategy each time they play. Character Progression: And now, every player is completely customizable: from weapons and loadouts, to abilities and outfits, all with full progression systems and a personalized armory to show off accomplishments, providing a constantly-evolving campaign experience.Prepare for a Leveled-Up Multiplayer: New Movement System: With Black Ops III, Treyarch premieres a new momentum-based chained-movement system, allowing players to fluidly move through the environment with finesse, using controlled thrust jumps, slides, and mantling abilities in a multitude of combinations, all while maintaining complete control over your weapon at all times. Tailored Map Design: Maps are designed from the ground-up for the new movement system, allowing players to be successful with traditional movement, as well as advanced tactics and maneuvers. Specialist Characters: Black Ops III multiplayer also introduces the new Specialist character system, which allows players to rank up and master each specific character's battle-hardened capabilities and weapons. With this addition to Traditional and Weapons XP progressions systems, Black Ops III multiplayer gives players three different ways to rank up.Fight the Undead in an All-New Horror Story:All-New Narrative: No Treyarch title would be complete without its signature Zombies offering - a full-game experience with its own distinct storyline right out of the box.XP Progression System: Black Ops III Zombies is the most immersive and ambitious Call of Duty Zombies to date, with a full XP-based progression system for players that adds depth and re-playability to the engaging gameplay Zombies fans have come to expect.

If your product becomes defected, we'll repair, exchange, or return it for free.

You changed your mind. No worries. We understand. That's why we offer free and easy returns within 30 days.

When you buy a product from The Store, you'll never pay for shipping. Ever. If you need to send a product back, we offer a convenient return shipping label.

The Store's Certified ReStored guarantee means that every restored product passed our multi-point inspection and ships with a detailed report outlining every feature we tested.
Ratings & reviews (1)
5/5
1 reviews
Newest Rating: High-Low Rating: Low-High
Jarrid D.
Verified Buyer
Call of Duty Cold war disk
Purchased: Activision Call of Duty: Black Ops Cold War (xb1)
It is a disk and it was brand new in a case perfect
You are offline, some of the functionalities are limited