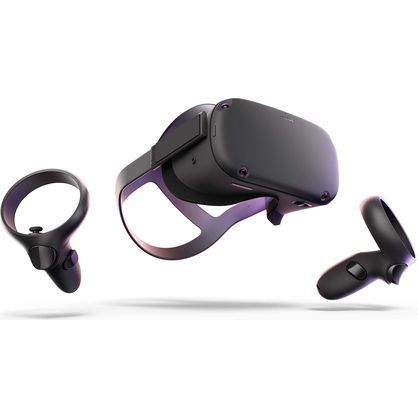 Oculus Quest is an all-in-one gaming system for virtual reality. No wires. No PC. Just set up with the Oculus mobile app, and you're free to explore VR from almost anywhere. Sensors inside the headset precisely track your movements and instantly translate them into VR, while helping you steer clear of nearby objects. And with Oculus Touch controllers, your hands are in the game, so you can see your every gesture and feel the power of every impact. Take VR gaming to the next level. And everywhere else.

Length
14.60 in
Height
5.20 in
Short description
<p> </p><ul><li>Next level gameplay: Launching with original games and experiences like Vader Immortal: A Star Wars VR Series</li><li>All-in-one VR: Simply set up the device with your Oculus mobile app and Oculus Quest has everything you need to explore VR, right out of the box</li><li>Insight tracking: Oculus Insight tracking system instantly reflects your movements in VR without the need for any external accessories</li><li>Touch controllers: Oculus Touch controllers precisely recreate your hands, their gestures and interactions, so every game is real enough to reach out and touch</li><li>Beyond room-scale: Oculus Quest works with your environment, so you can play standing or sitting, in spaces big or small</li></ul>
Weight
4.57 lbs
Width
9.00 in